Written by a non-scientist for a layperson audience. This means we're skipping the complicated science and going straight for the highlights.

Typing fast and editing slow, so excuse spelling mistakes. UPDATES FROM AUSTRALIA AND THE WORLD

Our Vision: A world without MND

Our Mission: To promote, influence and advance MND care and research to improve the lives of all Australian impacted by MND

The National Disability Insurance Scheme – opportunity to transform the lives of people with disability (est 2008).

State-based Associations worked to communicate with their members, pwMND, to ensure access to NDIS.

Still – every plan needs to be reviewed and altered, communications remains problematic, ‘value for money' argument is problematic.

What have we learned in the 14 years of the Registry?

Est 2004, pharma had deserted the field after failed clinical trials.

Web-based registration. Minimum dataset aligns with what other international centres are collecting.

Can we meaningfully aggregate patients together so we can give them a prognosis when we first see them, anticipate care needs? Set out basic parameters to define UMN and LMN signs to pull out 3 groups: ALS, Flail Limb, PLS.

Looked at major milestones in treatment of patients, and survival probability.

Major change is going from opt-in Registry to opt-out Registry. Opt-in is now thought to be unethical. Opt-out – unless you sign consent to get out, you're in the Register. Very important to get a more accurate population-based analysis.

“I'm really optimistic for the future for the next 5 to 15 years… It WILL lead to a cure.”

Speaker from Australian Clinical Trials: There are lots of cracks in the wall of the dam. It will crack, and of all the neurological diseases MND will crack first.

Funded to collect 150 pwMND and 30 controls.

Programme originally focused on Victoria, but people have flown interstate to be part of the programme. Early onset disease is model patient because responds well in the petri dish. Patient recruitment is ongoing. Register at Fight MND website, click ‘drug screening platform'.

An impossible task to give a full global update on clinical trials.

Although we have not cured MND, we have progressed in last ten years – and there are a number of medications we now use for symptom releif and quality of life.

MDT clinics are the biggest advance – patients in MDTs live on average a year longer.

While we wait for trial to be successful, and we are close than ever before the that happening, ti's important that we continue to treat patients with the disease.

There are many ways we are approaching the ultimate treatment of ALS.

Edaravone: introduction met with a bit of skepticism, similar to that which met riluzole. Reminder that advances are meaningful and incremental. Patients early on in disease with diffuse disease and fast-moving – showed  a 33% reduction in rate of progression. Represents a significant advance in ALS care. Lot of work yet to be done to made it easier to administer (currently multiple IV infusions).

Masitinib – interim analysis showed significant effect. Not published as some odd things about data. Is still an important drug to investigate further.

Tirasemtiv – improves skeletal muscle function. Phase 3 study slowed progression by two-thirds. Unfortunately drug proved very hard to tolerate. 34% of patients felt unwell, unable to continue to take the drug. However int he patients who continued, there was preservation of vital capacity – dropped about one-third slower on the drug.

Second generation version of tirasemtiv has been developed – CK-107. Increases force in muscles. Currently being testing in phase two study.

AMX0035 – looks at oxidative cell death of neurons. In a phase two trial.

Acetyl-L-Carnitine (ALC) important in mitochondrial function, shown to be protective against variety of insults. Met primary outcome in 2013, now others are trying to reproduce results.

“Many of us are very excited about these selected populations being treated better than they are now.”

Copper ATSM is a molecule that is stable, lipophilic, crosses cell membranes and the BBB in ALS patients.

Results in mouse models corroborated in 3 inrst timedependent labs. Fi in 15 years that ALS-TDI has confirmed efficacy of an ALS treatment previously published by others. It extended lifespan in 4 out of 4 mouse models (SOD1).

Developed in SOD1 mouse models, so how do know if it will have benefit for sporadic ALS? Anterior horn of brain in pwMND is copper deficient.

144mg cohort clinical trial is ongoing – recommended to be dose for phase 2. Phase 1 study should fully complete by end of 2018.

Comes from infectious disease background. Linking retroviruses to MND as a potential cause.

Potential that there may be a unique type of virus that may be the cause of trigger for MND. This type of virus is only transmitted from person to person. ‘Retrovirus'. HIV is retrovirus that took 40 million lives.

Retroviruses have a core of RNA, when attach to a cell the virus injects its core of RNA into the cell then releases an enzyme that converts the RNA into DNA that enters the nucleus of the cell and becomes part of your DNA.

Human Endogenous Retroviruses (HERVS) are one of the most important causes of natural selection, have affected humans for all generations. 8% of our genome is composed of viral DNA that has been integrated into our genome over human history.

We know of 5 retroviruses that are infecting humans now.

HERV-K is the most recent retrovirus integrated into our genome 100,000 years ago. Exists in 35 places on our chromosome. It's still a whole virus with all the components of a virus. This gene virus can be upregulated and turned on. When turned on, it can infect other cells. You don't catch it like the flu, it's part of your gene.

You find HERV-K in the motor neurons. Is this cause or effect? When introduce HERV-K into mouse, mouse developed MND.

Initial study to look at safety and tolerability of one drug combination in pwMND.

Found that HIV drugs are effective in blocking lifecycle of HERV-K.

Enrolled 40 patients at 4 sites in Sydney and Melbourne. Treated with Triumeq (combination of 3 drugs in one), a once-a-day tablet. Six months of open-label treatment (no control group). Most patients two years after onset of symptoms, more males than females.

Found Tiumeq safe and well tolerated. No interactions with riluzole.

During baseline phase p75 went up, continued to go up during first 6-8 weeks of trial (same as HIV treatment). Some people ‘responders', others ‘non-responders'. Statistically 5 people should have died over the time of the study, but no one died during the study.

Will continue for further study.

IC14 is a chimeric monoclonal antibody to CD14. Has an extensive clinical history and good safety profile. It's a master regulator of immune function and inflammatory response.

People in this study were more than happy to have a lumbar puncture, which shows how keen pwMND are to participate in research.

Believe that immunotherapy has great promise for MND.

Largest phase 2 study in Australia. Has not yet started.

MND is an infinitely complicated disorder.

Regulatory T cells – those with higher rates have slower rate of progression of MND. Tregs dysfunctional in ALS.

How can we upregulate these t-cells safely?

Tecfidera (dimethyl fumerate) in clinical use for MS for many years. Has an antioxidant response and anti-inflammatory response. Significantly improves responsiveness of T cells for immunoregulation by Tregs.

Should have results by early 2019.

Not patient-friendly. If develop an oral version that will be much more patient-friendly, can give every day in a home setting. If can give it daily, efficacy may also be higher. No reason why shouldn't give it every day because patient has oxidative stress every day.

Is it really the same drug? Yes, active ingredient is exactly the same.

With continuous daily dosing, monthly exposure to drug is 2.8-fold increase over Radicava.

Hope to have drug product available by end of this year.

About to start at Gold Coast Hospital. Enrolling 30 pwMND. Efficacy is the primary objective. Secondary objective is to evaluate safety, tolerability, effects on pain management.

One online survey: 91% reported improvement in quality of life.

ECS is a vital neuromodulatory system.

Few clinical trials of CBD in MND have looked at symptom management. None have investigated efficacy of cannabinoids in ALS.

Researchers and reviewers at ALS Untangled said: “The most logical next step is to conduct a human trial.”

About half pwMND seem to have reverse transcriptase enzyme (retrovirus) in blood – 5 studies replicate these findings.

Only 2% of FDA approved small molecule drugs cross the BBB.

Can we maintain effective drug exposure in tissues?

Like a swimming pool – water flows in and out. Dose of drug like hose into swimming pool. Drain in back could drain pool in seconds.

Multi-drug resistance in brain is like a pool drain/pumps.

With HIV need chronic daily therapy with ARVT – because of this ability of the brain to ‘pump out' drug therapy.

In principal, if we can block the ‘pumps' we can keep drugs in brain and spinal cord.

The PK enhancer Elacridar is not pharmacologically active, yet maintains therapeutic drug levels in pump-protected ‘sanctuary' parts of brain. Has relatively little effect on drug levels in plasma and peripheral organs.

Compounds that can normally only be given via IV, now become orally available.

To test: Start with patients who have HERV-K in blood. Use PK-enhancer to drive ARVT drugs into brain. Test with number of biomarkers.

Criticism – ARVT already cross BBB and are able to suppress HIV in the brain indefinitely if you continue to take them. They're not pumped out by any pump. You don't develop resistance unless you stop taking the drugs.

Response – have to take ARVT for life, not short-term like antibiotics, therefore it exists in ‘sanctuary pockets'.

What isn't Treeway dose-finding in current study? Because want phase 3 with highest chance of success. Maybe afterward will test other dosing schemes.

Only 375 new patients diagnosed with ALS in Australia each year, but many clinical studies. Should probably be thinking about sequential studies.

Why are people with PEGs so often excluded from clinical trial? If medicine if a pill it is for practical reasons. It also gathers a more homogeneous population, to help demonstrate efficacy.

Is any MND reversible? That's the holy grail but no one suggesting possible from current therapies. Don't know of any neurological disease that has been reversed. Just being slowed down. Could bone marrow transplant approach work (eg infusion of stem cells)? We're not smart enough to say we can't do it. In polio, re-innervation of muscles does occur.

What do you tell patients who see clinical drug cannabis being tested, why not access cannabis through other sources? Decision to be made by the patient. Tell them there's really no data. Studies are to start providing information for patients.

Prof Ammar Al-Chalabi – What causes MND? Why me? 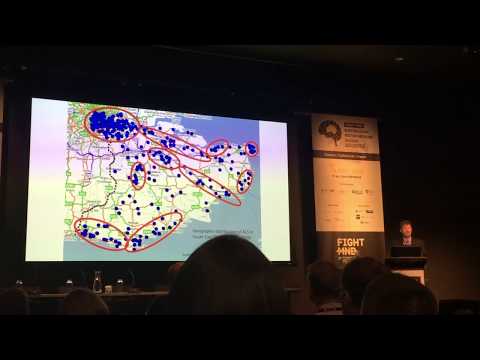 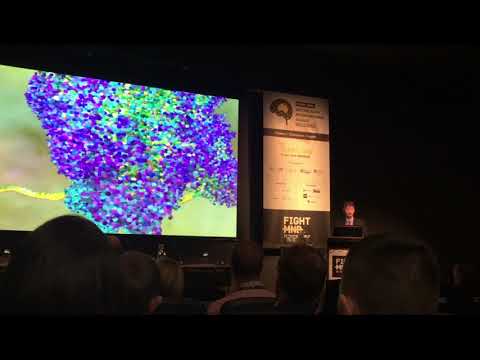 Prof Kevin Talbot – Why haven't we found a cure yet? 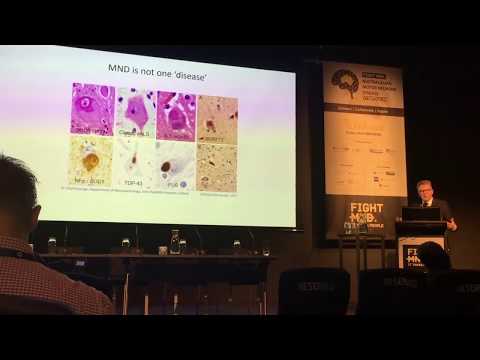 Stem cells can differentiate into other types of cell.

There are many types of stem cells.

Has been tried in MND with no obvious success.

“Mesenchymal” stem cells derived from fibroblasts are the basis of the Brainstorm trial, injected into ALS patients.

What are the oldest cells in your body? Neurons in your nervous system. Neurons don't replicate themselves. Substantial ramifications for how brain repairs itself. Once a neuron becomes differentiated, it will never replace.